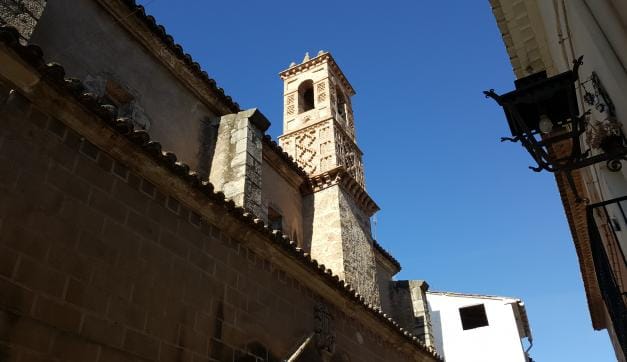 The church of Cristo de la Sangre, in the Valencian town of Jérica (Alto Palancia) is a religious building dating from the 17th century. It was built in the Baroque style but later refurbished in the Neoclassic style. The church is catalogued as an Asset of Local Importance, as recorded in the Dirección General de Patrimonio Artístico de la Generalidad Valenciana (Valencia Regional Government's General Directorate of Artistic Heritage).

Very few written documents are able to provide reliable information on the church of Cristo de la Sangre, although the report entitled "Informe de la Diócesis de Segorb" dated 1656 does include a chapter describing events that took place in Jérica. This document is evidence that back then, Jérica had three functioning churches, called San Roque, La Virgen del Loreto and Cristo de la Sangre. This also suggests that the church had already been built by the mid-17th century.

Member of the Real Academia de Bellas Artes de San Carlos, art historian and director of the Segorbe Cathedral Museum, the late Ramón Rodríguez Culebras, described the successive transformations and refurbishments that the church went through in the 17th and 18th centuries.

The church is built on a rectangular layout with a single nave and four sections, in addition to side chapels between the buttresses (visible from the outside), with no transept and with a rectangular apse.

The raised choir is in the first section and is accessed via a staircase outside the nave; underneath the choir there is a lowered vaulted ceiling.

The nave is covered by a barrel-vaulted ceiling with elongated masonry lunettes, which are set high on both sides, allowing natural light to illuminate the inside space. Outside, the roof is sloping and made of Arab roof tiles.