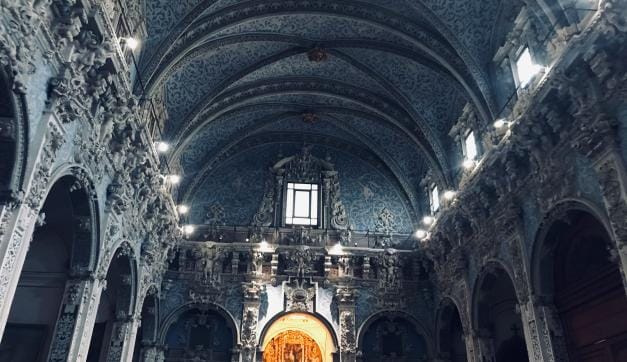 Built on the site of an old mosque, the church of San Esteban has the typical layout of Valencia's Gothic period parish churches, with a single nave and chapels between the buttresses. However, the church underwent major Baroque style alterations during the 17th century. Its outward appearance is very plain, featuring buttresses topped by gargoyles that jut out from the smooth wall, a simple doorway leading onto Plaza de San Esteban and the bell tower standing alongside.

But, if you go in you'll be surprised by the extravagant plaster and sgraffito decoration. Unlike other Valencian Baroque churches, the vaulted ceilings in San Esteban were not covered over after being rebuilt in the 17th century between semi-circular arches. The decoration includes plaster pilasters between the chapel arches, holding up an entablature that is completely covered with plant motifs and angels. The background was painted in various colours, blue in particular, with white sgraffito featuring undulating plant motifs.

San Esteban was the notaries' church, and in 1682 the Brotherhood funded the construction of the chapels at the back, with the baptismal font of San Vicente Ferrer and San Luis Beltrán in the middle.

Around 1560, Valencian painter Juan de Juanes dedicated his tome to completing the painting that was to be placed on the main altarpiece in the church of San Esteban: a Last Supper inspired by Leonardo Da Vinci's painting for Santa Maria delle Grazie in Milan. At the centre of the painting, just in front of Jesus, the painter, who was to become one of the greatest artists of the Spanish Renaissance, decided to place a fundamental element in the scene that was missing from Da Vinci's work, none other than the Holy Grail.