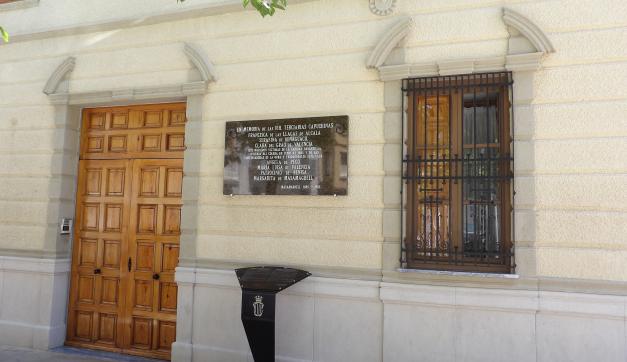 The religious order of La Congregación Religiosa Hermanas Terciarias Capuchinas was founded in 1885 in Montiel by Franciscan friar Luis Amigó y Ferrer, a resident of Massamagrell, for the main purpose of caring for those who fell ill in the cholera epidemic that devastated the towns of Benaguacil and Massamagrell.

Later that same year, he founded the "Asilo de la Inmaculada Concepción y de San Francisco de Asís", a children's home in Massamagrell that provided care for children who had been left orphaned. The Asilo became a children's shelter and in 1907, the Colegio de la Sagrada Familia was founded to, in principle, feed, dress and educate girls who came from deprived family backgrounds. Back then the school was a private charitable teaching institution whose mission was to take in orphans and occupy their time with useful learning so they could be integrated back into society.

Today, the Colegio Sagrada Familia is a privately run school. It was originally a girls' school but nowadays it is mixed.

The church foundation stone was blessed on 30 November 1916 and work was completed on 18 January 1919.

The convent complex has four main sections: the museum rooms, a chapel for celebrating mass, another chapel with the tomb of the Honorable Padre Luis Amigó de Massamagrell, founder of the Order of the Hermanas Terciarias Capuchinas and the crypt where the nuns' relatives are buried.

The Neo-Gothic church is dedicated to the Sagrada Familia (Holy Family) and has a single nave. The tomb of Padre Luís Amigó is at the back of the church.

The museum and the site are linked to the tourist story that connects this place to the Holy Grail as a relic and Eucharistic sacrament. There are also historic links that connect the route with this building and its founder.