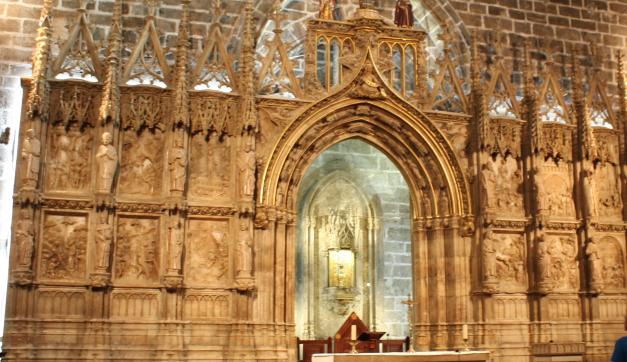 The Catedral de Santa María (Cathedral of Santa María) in València, popularly known as La Seu, is the headquarters of the Archbishop of València and it was the wish of King Jaime I that it should be dedicated to the Assumption of Mary. It was consecrated in 1238 by the first Bishop of València following the Reconquest, Fr. Andrés de Albalat.

València Cathedral was built on the site of an old Roman temple dedicated to Jupiter, which subsequently became the Visigoth cathedral and then the Arab mosque of Balansiya. Very little of these buildings has survived to the present day.

The cathedral's main structure was built between the 13th and 15th centuries, so it is primarily Gothic in style. However, because building work went on for centuries, the cathedral is a mix of artistic styles, ranging from Romanesque, French Gothic, Baroque and Neoclassic. This diversity is the cathedral's most distinctive feature and makes it a gem of universal architecture.

Inside, worshippers venerate the Holy Grail, dating from the 1st century. The relic was presented in 1399 to the King of Aragón, Martín “El Humano" (The Humane), who kept it in Zaragoza and afterwards in Barcelona until his death. In around 1424, King Alfonso V "El Magnánimo" (The Magnanimous) took the royal relic to the palace in Valencia, and to mark this king's stay in Naples, it was presented to Valencia Cathedral together with other relics in 1437.

It was preserved and venerated for centuries, being used up until the 18th century for holding the consecrated Host in the Easter Thursday "monument". During the War of Independence, it was taken to Palma de Mallorca, fleeing from the clutches of the Napoleonic invaders. In 1916 it was finally placed in the old Chapterhouse, which was converted to become the Chapel of the Holy Grail.

The cathedral contains some of the earliest and best paintings of the Quattrocento on the whole of the Iberian Peninsula, brought from Rome through artists contracted by Rodrigo de Borgia, Pope Alexander VI. The last Valencian Pope, when he was still Cardinal Rodrigo de Borgia, requested the city of Valencia should be elevated to the rank of Metropolitan, a status that was granted by Pope Innocent VIII in 1492.