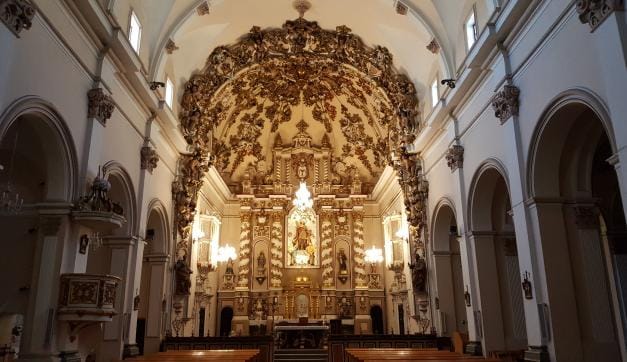 The church of Santa Águeda la Nueva in the town of Jérica (in the Alto Palancia region of the Province of Castellón) stands in Plaza de la Iglesia alongside Plaza Hermano Mariano Rodríguez. The building is catalogued as an Asset of Local Importance.

Records show that in 1385, the Infante Don Martín donated his palace and the adjoining allotment to provide land for building the new church of Santa Águeda; this resulted in building work on the well-known Ermita de San Roque to be halted.

The church was originally built in the Gothic style, but in the 17th century it underwent refurbishment in the Baroque style, which is when the Baroque style entrance must have been built, considered by experts to be a monumental example of a reredos style door.

During the Spanish Civil War, the church was severely damaged and needed rebuilding, refurbishment and restoration work.

The church consists of six sections with two naves: central and lateral. The central nave opens out into side chapels on both sides, although those on the right are larger. Below it is the Capilla de la Comunión (Communion Chapel), built in the mid-18th century along the lines of Neoclassic architecture. The High Altar you see today is a copy of the previous altar and was made by the Regiones Devastadas service at the end of the Spanish Civil War. The decoration on the domed ceiling over this section is original and dates from the Baroque refurbishment.

The church façade dates from 1749 and belongs to the set of reredos style façades so often seen in this region. On the wall at the right hand side are two embedded towers which belong to the third ring of the town wall.