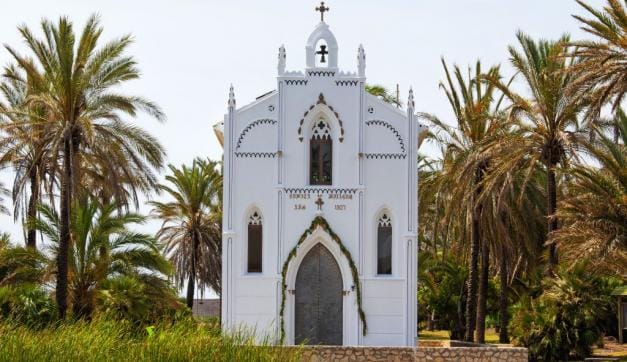 In the seaside town of Alboraya there is a chapel on the seashore that was built to commemorate a miracle, the Ermita dels Peixets (the chapel of the little fishes). The chapel, dedicated to the Most Holy Sacrament, stands in memory of the miracle that, according to the legend, took place on this very spot in the 14th century.

In 1348 a priest wanted to visit some sick people so he could give them Communion. On the way, while he was trying to cross the Carraixet gully on his mule, the animal slipped and the coffer containing the Communion wafers fell into the water. The priest had no choice but to give up searching for the wafers, which had scattered in the fast‑flowing current, as he had to escape to save his life.

A while later, some fishermen led him to the river bank because they had seen fish holding some of the Communion wafers in their mouths. The priest didn't hesitate to go and see what the fishermen were telling him and when he arrived, he was overjoyed to see three fish right in front of him, almost out of the water and with the Communion wafers intact in their mouths.

The priest knelt down there and then, held out the chalice and prayed. Seconds later, he saw the fish place the Communion wafers in the chalice. Then they leapt back into the water and swam downstream until they disappeared out to sea. At that moment, the priest realised that he was surrounded by a group of men and women who had been watching the incident of the recovered Communion wafers, which were later taken in solemn procession to the church.

Today you can still see the many documents bearing witness to the Miracle and the Ermita dels Peixets stands in the same spot where the events took place.

The Neo-Gothic style chapel has a rectangular layout and dates back to 1901. The front of the chapel is divided vertically into three sections separated by buttresses finished off with decorative pinnacles. The entrance door is in the central section and the side sections feature figures referring to the miracle. Over the top, ceramic letters spell out the words 'Ermita del Miraglo - Año 1907' (Chapel of the Miracle - Year 1907). Inside the chapel, near the High Altar, is a ceramic panel depicting the miracle.