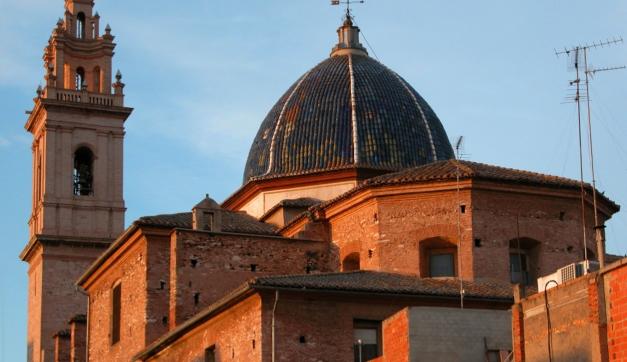 The Parish Church of San Juan Apóstol y Evangelista is a Catholic church dedicated to Saint John the Evangelist that stands in Plaza de la Constitución in the town of Massamagrell, in the province of Valencia. The church building dates back to 1767 and is listed as Bien de Relevancia Local (an Asset of Local Importance).

This is one of the largest churches in the province. Its size and streamlined appearance have earned it the nickname of “la Catedral de l’Horta” (cathedral of L'Horta).

The façade is typical of the Baroque period and has a medallion depicting the “Martirio de San Juan en la tina” (martyrdom of Saint John in the vat) by Luís Domingo-Paneles de Soler Blasco and Juan Celda.

The church is Neoclassic with Roccoco decoration and is spacious, built round a cloister and with a square bell tower that was restored in 1990. There are five bells called El Cimbolet, La Marina, La Valenciana, La Secana and La Saguntina. It also has a square Baroque tower standing 42 metres high and with 114 steps up to the bell loft. The decoration on the top is Classic and the pilasters on each side of the semi-circular arches are in the Doric style. The interior is Neoclassic with three naves and daylight streams into to the transept through a number of large windows.

Inside, you can still see the baptismal font where the venerable Padre Luis Amigó y Ferrer was baptised.

In terms of the paintings decorating the church interior, the Apostles and Saints are painted onto the spandrels of the arches. The artist was Juan Celda de la Visitación, the church priest from 1980 to 1997 and a resident of Massamagrell.

The parish church also has a wealth of painted iconography, with shells on the dome depicting the four corners of the world.