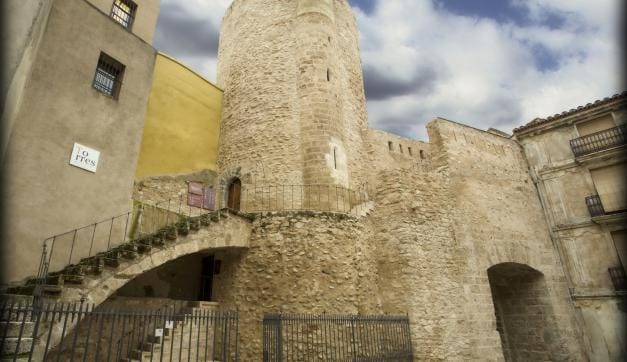 The weakest points of any perimeter wall are its gates, so defensive towers were built next to them as protection. The best example of this can be seen in Segorbe with the Torre de la Cárcel (the prison tower), standing alongside one of the old access gates to the city, the Teruel gateway.

From the outside the tower has a cylindrical layout with a larger diameter lower section that is probably earlier than the upper section and houses the cells once used to hold prisoners. The second section has a diameter of 8.70 metres and is divided inside into two octagonal floors, with Gothic style ribbed vaulting, loopholes and access to the terrace via a spiral staircase embedded into the wall. The total height is 21.30 metres and is likely to date from around the 14th century.

Torre del Verdugo (the executioner's tower) is a little shorter than Torre de la Cárcel at 18.65 metres, but it is broader, with a diameter of 1.75 metres. The tower is subdivided into two parts, the first is solid and stands 9.90 metres high and the second is open to the town to prevent it being used against the inhabitants.

The tower has a ribbed vaulted ceiling and the upper floor is accessed via a stone staircase that crosses the open space of the wall perpendicular to it. The irrigation channel from the aqueduct runs through the inside of the tower and its name is thought to come from the nearby executioner's house.

The building features seem to point to a construction period somewhere around the 14th century and it may well have been built as a result of the war between unionists and royalists, or the war involving the king of Castile, Pedro I “El Cruel” and the king of Aragón, Pere IV “El Cerimoniós”, in which Segorbe played a major role.