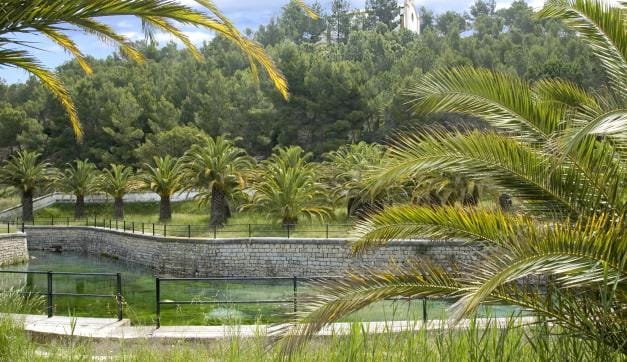 Three kilometres from Segorbe and on a leafy hill is the Esperanza chapel, standing alongside the remains of what was once a Hieronymite monastery, founded in the late 15th century and destroyed during the Carlist wars. The spring is at the foot of the hill, with more than enough water to supply the city and irrigate part of its agricultural land, as well as supplying a further two neighbouring towns.

In the 13th century, Jaime I, King of the Crown of Aragón, established the way in which water from the spring of Nuestra Señora de la Esperanza was to be shared out the flow was divided into seven parts, five of which were for Segorbe, one for Altura and another for Navajas.

From the air, the spring looks like a huge ham-shaped swimming pool, set in the middle of a palm grove and gushing 500 litres of pure water per second.

On the Wednesday of the first week of the Annual Festival, held between the end of August and the beginning of September, the people of Segorbe make a pilgrimage to the spring to commemorate the festivity of Nuestra Señora de la Esperanza. The pilgrimage has been taking place since the 15th century and has become one of the biggest attractions of the entire Annual Festival. In addition to the pilgrimage itself, a wide variety of events are held in the countryside around the spring, including a Mass in the chapel dedicated to La Virgen de la Esperanza to give thanks for the precious gift of water.