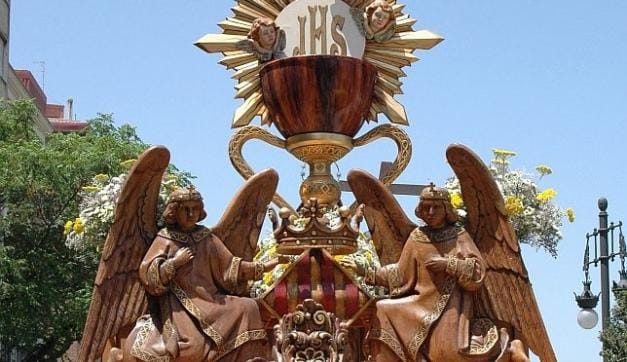 The Corpus Museum, also known as "Casa Museo Las Rocas", is in the city of Valencia. The museum is based in the old Casa de las Rocas and in an adjoining building that was recently restored to house part of the museum collection.

Casa de las Rocas was built in the 15th century, in the period between 8 June 1435 and 8 April 1447. The earliest documented evidence of the Casa is dated 8 July 1435, the date on which the city discussed and approved the construction of a building next to the Portal dels Serrans, between the city walls, that is, between the oldest and the newest dated 1356. It was built on the orders of Pere “El Cerimoniós” to house carts and other items used in the Corpus procession.

It is possible that building work went ahead immediately as planned, but it obviously did not satisfy the Council, neither was the building as large as it should have been for all the items that had to be stored inside. As a result, on 5 May 1441 it was agreed that the building should be extended. Five years later, on 22 March 1446, the city agreed to purchase a tannery in the Roteros neighbourhood. A month later, the Syndicate announced the purchase to the City Council and one year after that, on 18 April 1447, building work started. The work was completed in 1448.

The contents of the museum may seem few in number but they have great artistic and historic value. They comprise the eleven "Rocas", the three symbolic eagles, the ark of the alliance, the giants, the bigheads, the "cuca fera", the "Tarasca", Saint George's dragon, etc. Nowadays, the museum also has a library and screens films about the Corpus festival to tour groups by arrangement.