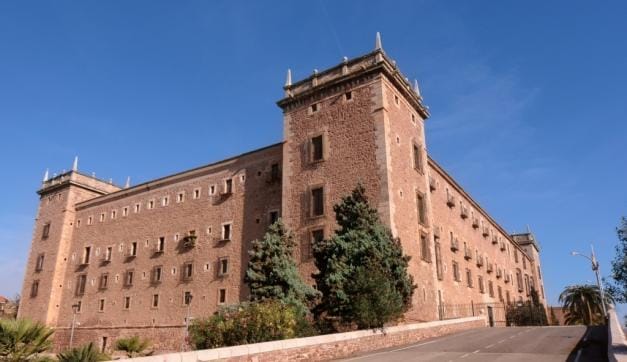 The Real Monasterio de Santa María del Puig was declared a National Artistic and Historic Monument (Asset of Cultural Interest) in 1969. It stands in the town of El Puig, in the area known as the Horta Nord of the Region of Valencia, only 14 km from the city of Valencia.

The monastery was built in the style of a Renaissance religious building with Herrerian influence, with four towers as defensive features. It was founded by order of King Jaume I, known as El Conqueridor, in 1240. Its historic importance comes from the fact that this was the setting for the definitive confrontation in the conquest of Valencia in 1237, the Battle of El Puig.

The monastery was founded on the orders of King Jaume I. While the king was in the town of El Puig preparing to besiege the city of Valencia, San Pedro Nolasco, founder of the Order of Merced, unearthed a stone carved icon of the Virgin Mary that had been buried under a bell on the hill where the monastery stands today. The king regarded this find as a miraculous event and proclaimed Santa María de El Puig as the Patron of the Kingdom of Valencia, ordering a monastery to be built to house the image and appointing the Mercedarians as guardians of the sanctuary in perpetuity. No trace remains of the initial building, which would have been a simple chapel dating back to the Reconquest, except for the entrance to the present-day church, which is not in its original location.

The purpose for which the monastery has been used has changed a number of times over the years, as it has been a church, a prison and a school. Nowadays, part of the building is still occupied by the Mercedarians and the other areas serve as venues for cultural and political events.

Inside, you can visit the cloisters, the Royal room, exclusively for use by Spanish monarchs when they visit Valencia, the Jaume I Gothic room, where a reproduction of the king's sword is on display alongside a section of facsimile documents, and the Salón de la Cerámica (Ceramics room), housing numerous ceramic items dating back to the Romans, the Iberians and other periods in history.